Memory is ubiquitous and fundamental to all computing systems, yet incumbent technologies are still dominant, mostly unchanged for decades but facing increasingly higher hurdles placed by Moore’s Law. SOT’s unique and revolutionary attributes combine performance and reliability requirements for both RAM and NVM applications.

SOT-MRAM does not require passing of a high current through the magnetic device (the so-called Magnetic Tunnel Junction) during the Write operation, which is done by a current flowing through an adjacent "SOT" metal line.

The absence of high-voltage stress on the device allows for practically infinite SOT-MRAM endurance even at the fastest, sub-ns write speeds. Furthermore, SOT-switching does not need to rely on thermal activation to initiate switching, which makes reliable sub-ns switching with no incubation delays inherently feasible. As a result, SOT-MRAM may be used as DRAM-like working memory or SRAM-like cache memory, which is impossible with STT-MRAM.

SOT uses the same core MTJ as the existing STT and can thus be easily implemented in the same manufacturing environment as STT.

Two physical phenomena are understood to be at the origin of the spin-orbit torques (SOT): A bulk component, the Spin Hall Effect, and an interfacial component, commonly known as the Rashba Effect.

The Spin Hall effect induces a spin current transverse to the charge current flowing in the SOT layer, leading to a spin accumulation at the SOT interfaces, which then diffuses into magnetic materials.

The Rashba effect originates from the uncompensated electric field at the interface, resulting in an effective magnetic field directly acting on nearby magnetizations.

Both effects lead to magnetic torques, that can control the magnetization direction of an adjacent magnetic “storage” layer, to write a binary “0” or “1” in the MRAM cell.

SOT is based on spin-transfer effects, just as today’s STT MRAM. However, unlike STT, there is no need for a magnetic layer to spin-polarize the electrical current. The source of spins is simply the lattice of a SOT layer material via the spin-orbit interaction. 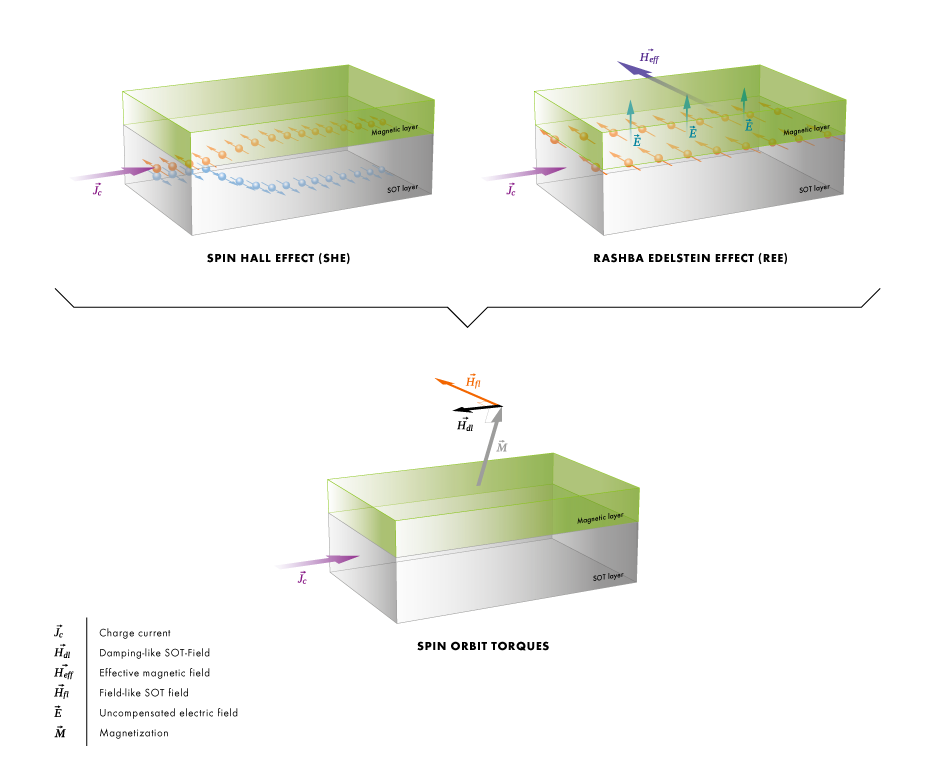